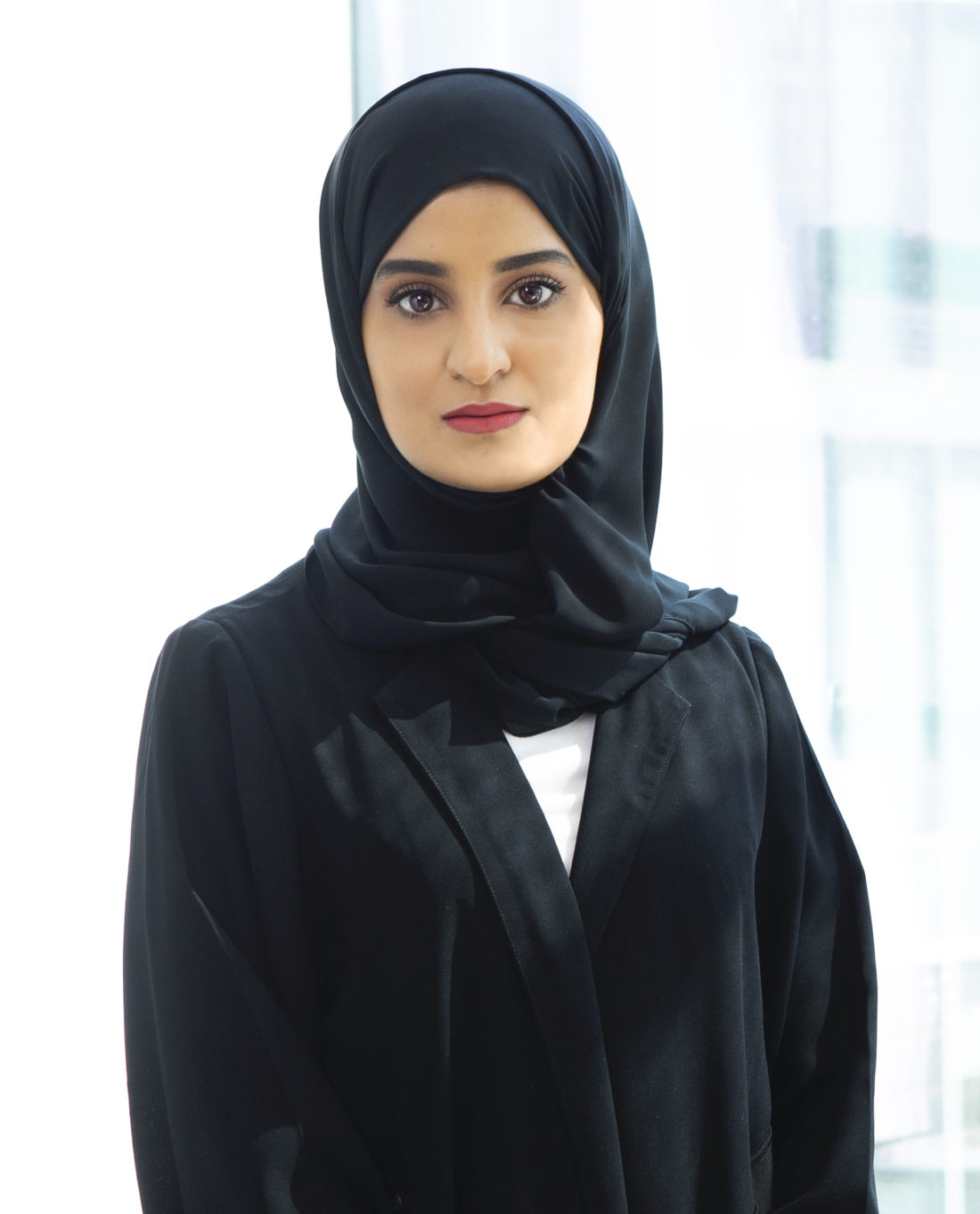 Product designer Aljoud Lootah launched her studio in 2014. Since then, the studio has preserved its unique approach by focussing on the idea of contrasts in form and function while distinctly interpreting the Emirati culture and artisanal techniques through contemporary design. Her creative drive comes from a passion for detail and experimental approaches to materials and aesthetics. This emphasis has resulted in a body of work that is functional, timeless, and unique. Some of the prestigious projects by Lootah include Dubai’s Mandarin Oriental Hotel, the Dubai International Airport, Abu Dhabi’s Etihad Airways, and the UAE’s Ministry of Presidential Affairs. 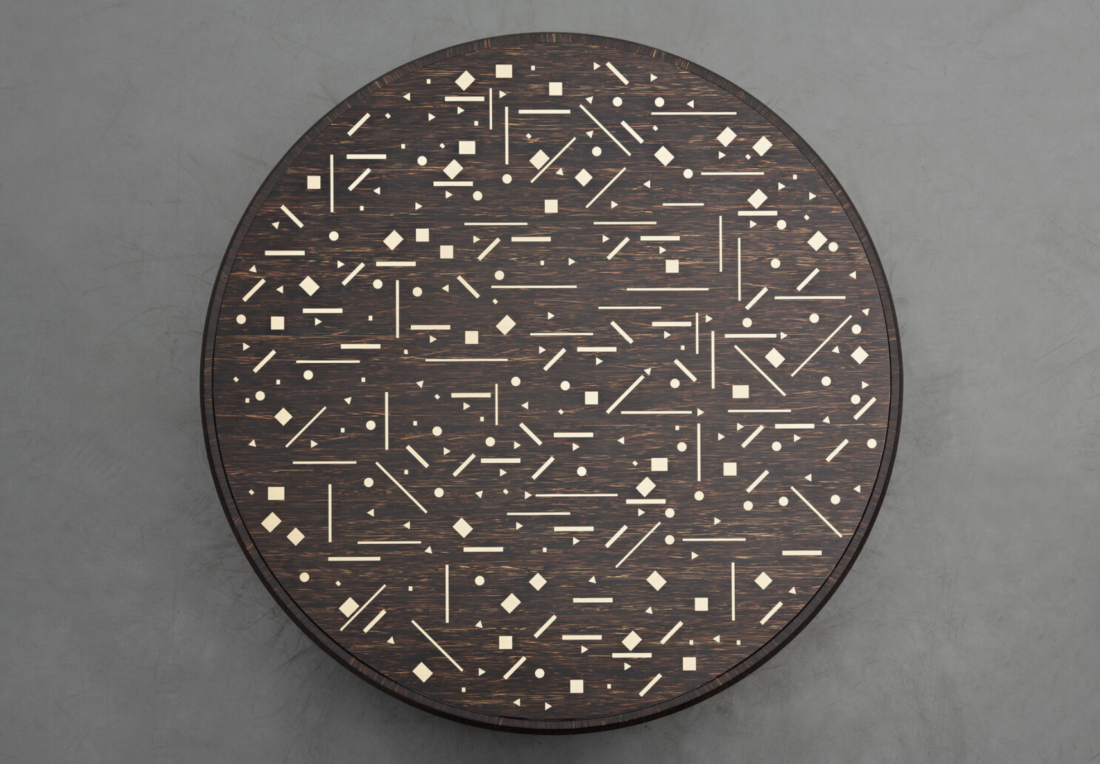 A wall hanging unconventional clock that celebrates the natural landscape of sand dunes formations that are shaped and affected by wind. As time passes, the clock changes colour.

2. David & Nicolas – Constellation c041
A table inspired by the stars and black holes, part of a collection which explores the concept of life, death and regeneration. With Beirut in mind, the designers developed this table to create a body of work that would remind them of their city that was reborn over and over again. 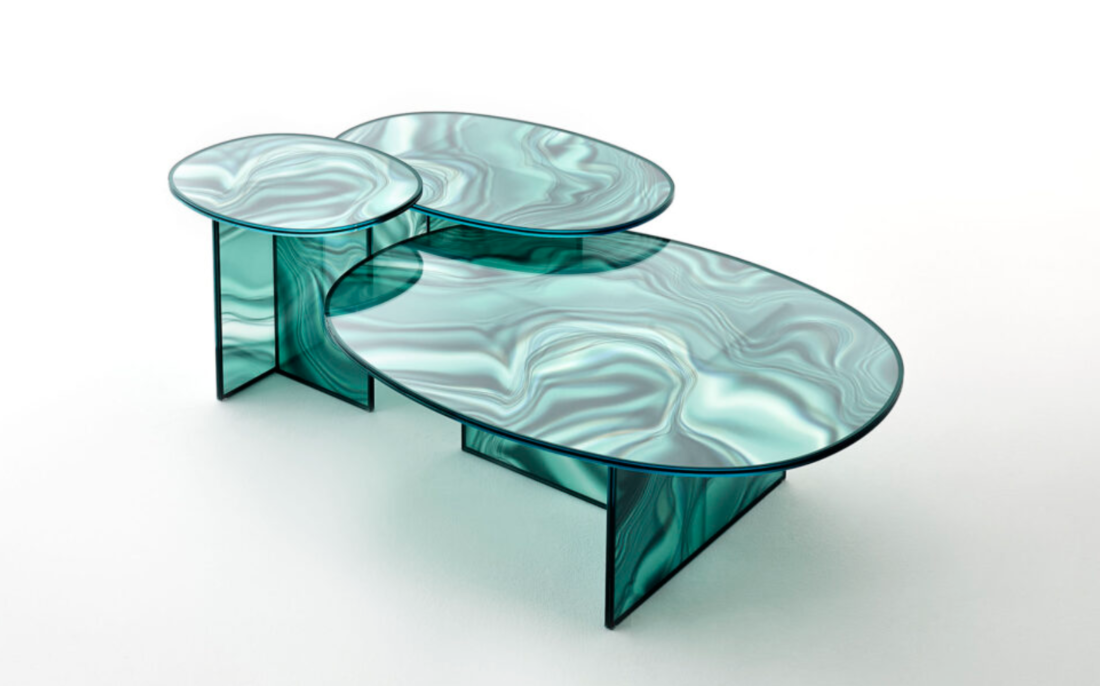 A collaboration with Glas Italia resulted in oval-shaped high and low tables that celebrate the fluidity of glass. The effect adds dimension to the surface allowing it to look dynamic from various viewpoints.

4. Max Lamb – 222 last splatter stool
A collection of stools made of single sheets of metal that are shaped by spinning the sheets at high speed, and then manually lacquered and speckled with various paint to create a wonderful organic pattern. 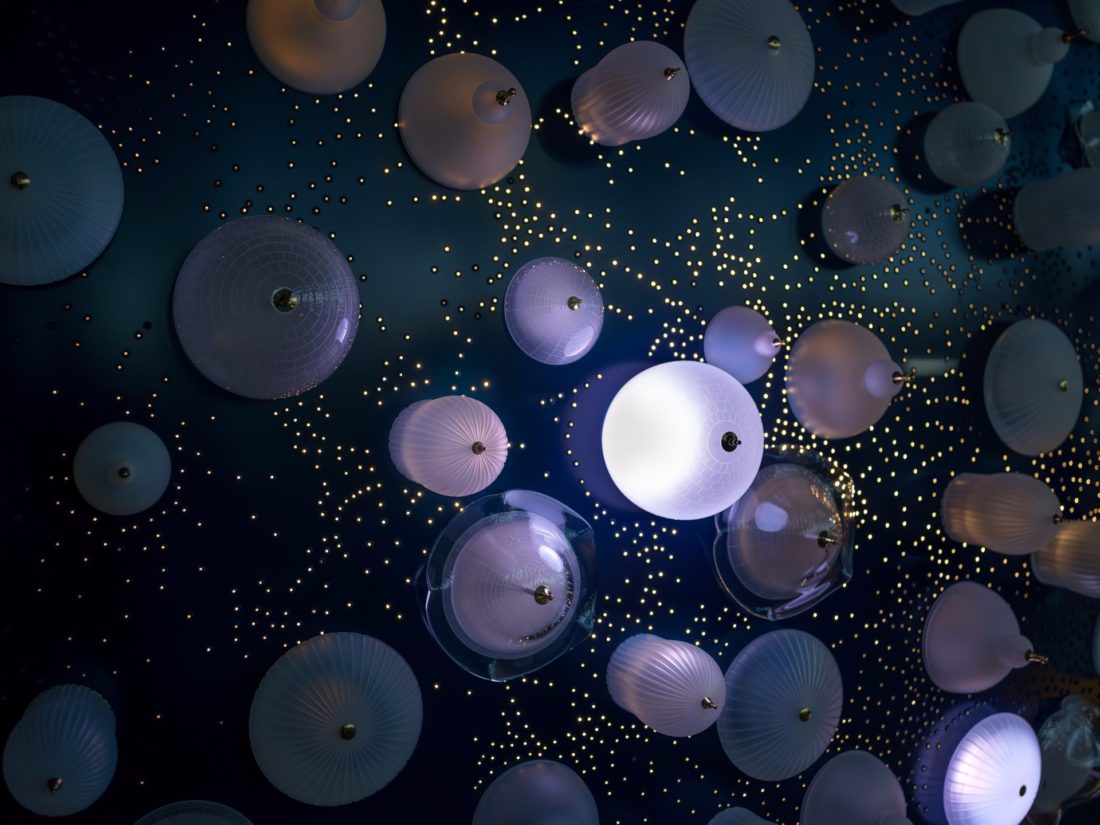 A creative take on the Athan (prayer calling) where the designer collaborated with Lasvit to create an interactive lighting installation featuring various domes from Mosques around the world that would light up at different times of the day, calling for prayer.

6. Lina Ghalib – Yereed
A bench made of dried palm fronds, peeled, assembled and shaped to create a solid material that can then be cut to form various objects. 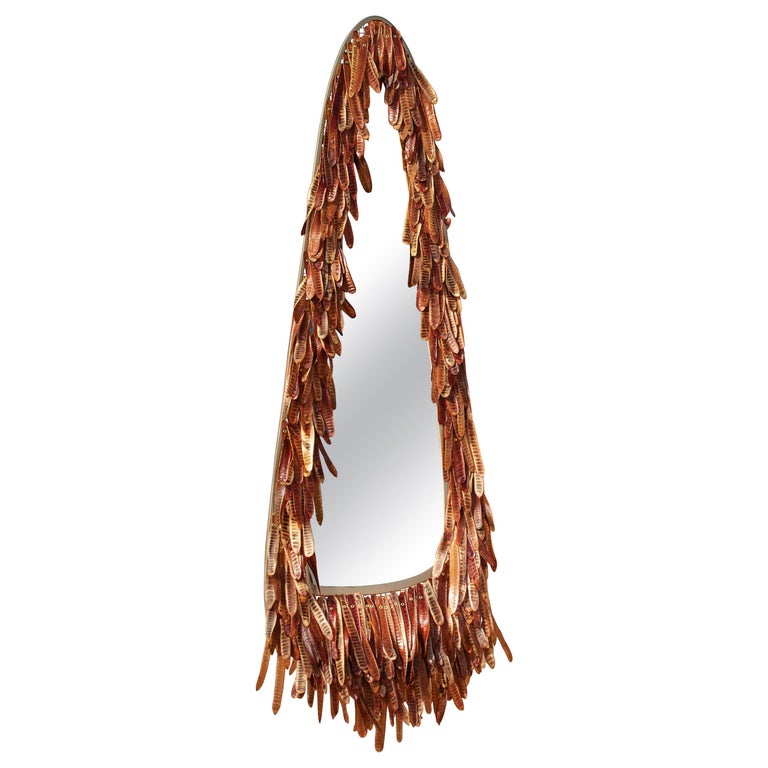 A series of products were designed by Nuhayr to repurpose abundant materials from the region. The mirror features dried pods and leaves of White Popinac that are stitched to form a skin that mimics the feathers of a falcon.

8. Nada Taryam / Architecture & other things – Hajar Chair
A sand-cast chair that was made as a collaboration with Irthi Contemporary council. It is an experiment using water, sand, concrete, clay and soil to create a rock-like material that is inspired by the mountains of the UAE 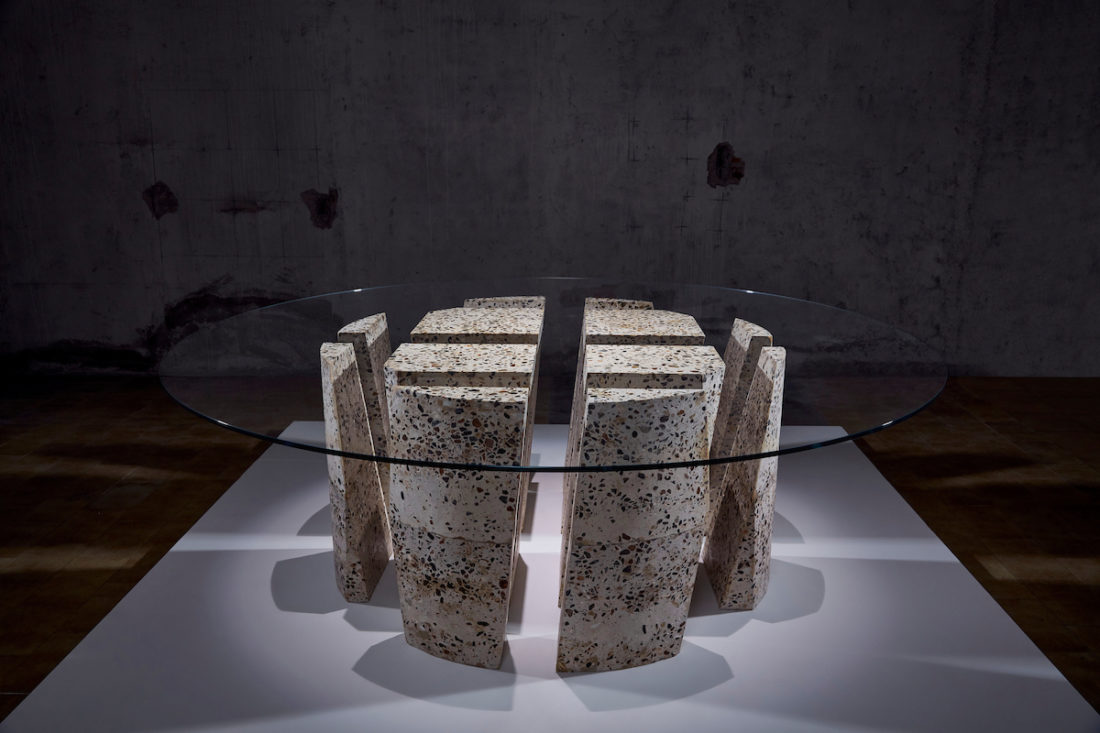 The designer excavated material from the core of the foundation of his London Studio by drilling into the floor after being evicted. He extracted many concrete cylinders which he sanded, polished and cut to form various products including the featured table. 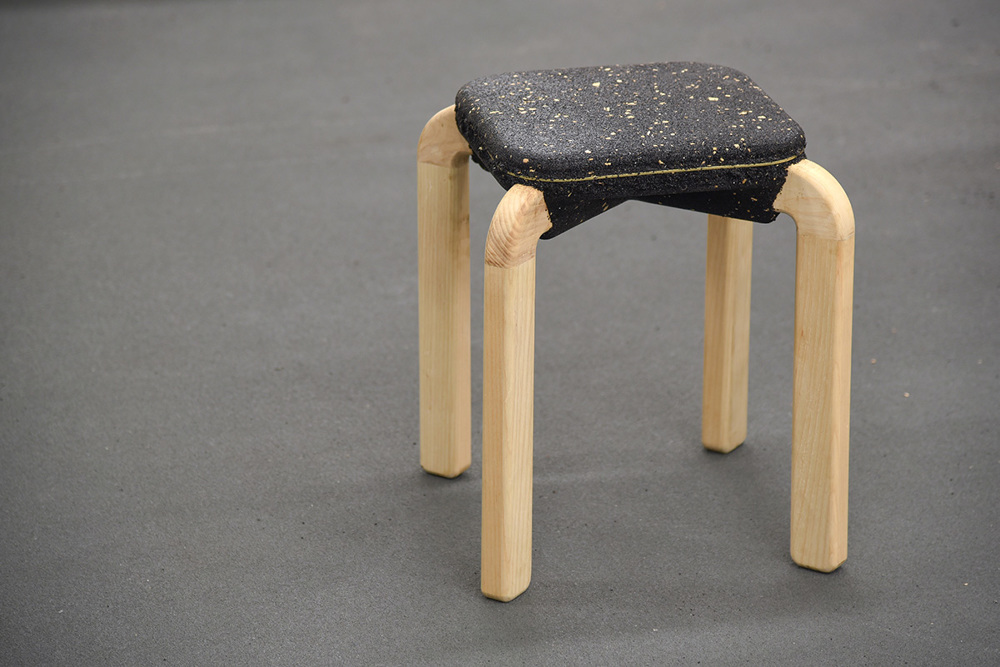 Commissioned by Sharjah’s Bee’ah, the designer explored the potential of using recycled rubber from tires to create functional furniture pieces.